Part 6 of Helen's Food in Literature series is a single extract from American Pastoral by Philip Roth. 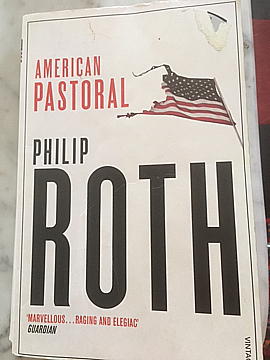 ​The Dinner Party from hell

This is a masterpiece. Seymour “Swede” Levov has personified the American Dream. The son of Jewish immigrants who have built a successful business making gloves (there are meticulous, fascinating descriptions of glove manufacturing), he was an all round sports champion and high school idol and he is blessed with extraordinary good looks. He takes over his father’s business, marries Dawn, a former Miss New Jersey and buys the home of his dreams, an old farmhouse, that he restores. They have a child, Meredith “Merry”. Then , against a background of the economic and political unrest of 70’s America, the Vietnam War, race riots and Watergate, we see the Swede’s world collapsing. No one wears gloves anymore, certainly not fine, measured leather ones, so the bottom drops out of the glove manufacturing business. Newark, the site of his factory, is the scene of race riots and urban decay. Worst of all, his beloved daughter becomes a terrorist. She’s involved in the bombing of their local store and post office, in which a well respected doctor is killed. She goes on the run. Dawn has a breakdown and their marriage suffers. The Swede persists in trying to hold everything together. At the end of the book he hosts an awful dinner party.

“There was a beautiful flower arrangement at the centre of the table. “From Dawn’s garden, ” Lou Levov had told them all proudly as they were sitting down to eat. There were also large platters of the beefsteak tomatoes, sliced thickly, dressed in oil and vinegar, and encircled by slices of red onion fresh from the garden. And there were two wooden buckets – old feed buckets that they’d picked up in a junk shop in Clinton for a dollar apiece – each lined gaily with a red bandana and brimming with the ears of corn that Orcutt had helped her shuck. Cradled in wicker baskets at either end of the table were freshly baked loaves of French bread, those new baguettes from McPherson’s, reheated in the oven and pleasant to tear apart with your hands. And there was good strong Burgundy wine, half a dozen bottles of the Swede’s best Pommard, four of them open on the table, bottles that five years back he had laid down for drinking in 1973…The two high school kids who were doing the serving emerged from the kitchen every few minutes, silently offering around the steaks he’d cooked, arranged on pewter plates, all carved up and running with blood. The Swede’s set of carving knives were from Hoffritz, the best German stainless steel. He’d gone over to New York to buy the set and the big carving block for their first Thanksgiving in the old Rimrock house. He once had cared about all that stuff. Loved to hone the blade on the long conical file before he went after the bird. Loved the sound of it. The sad inventory of his domestic bounty. Wanted his family to have the best. Wanted his family to have everything.”

The Swede has just returned from a visit to see Merry, who he has been looking for five years. She is living in squalor and now belongs to an extreme Jainist sect. She not only admits that she knew what she was doing when her terrorist cell bombed the store but tells him that she was complicit in the murders of three more people. He has to accept that he has lost his child for ever. Dawn has announced that she wants to sell the farmhouse and move into a modern, streamlined purpose built house. Orcutt is the architect she employs and the Swede has caught a glimpse of the two of them in the kitchen, has realised that they are having an affair and suspects that the new house is being built for the two of them to live in. The other guests include Orcutt’s wife, a hopeless alcoholic, the Swede’s overbearing father Lou and his mother and his former mistress and her husband. In the same meeting with his daughter the Swede has learned that when she first went on the run it was this woman who secretly sheltered her. The evening ends with Orcutt’s wife stabbing Lou Levov in the face with a fork.

I tried to think of a similarly tragic, back comedy dinner party and could only come up with the final scene in Titus Andronicus. Titus’ daughter Lavinia has been raped and had her tongue cut out by the two sons of his mortal enemy, Queen Tamara. In a crazed belief that she has been dishonoured, he kills Lavinia and the perpetrators. He then holds a banquet and serves Tamara a pie containing their bodies. After she has eaten it, he declares its contents:

“Why there they are both, baked in that pie;
Whereof their mother daintily hath fed,
Eating the flesh that she herself hath bred.
’Tis true, ’tis true; witness my knife’s sharp point.”

He then kills Tamara and is himself killed.