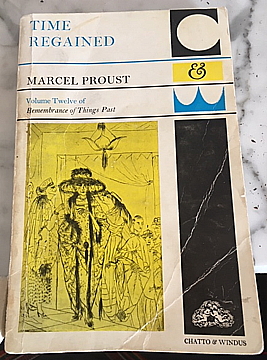 This is the final volume. Everyone knows about the madeleine dipped in the lime tea and about Francoise’s boeuf en gelée but this description of a dinner at the appalling Madame Verdurin’s is far less well known and I’m going to include it, despite the fact that it is part of a pastiche of another writer (Edmund de Goncourt) because I don’t think that Proust intended to denigrate entirely this description, and even if he did, I think it’s good.

“We go into dinner, and there follows an extraordinary cavalcade of plates which are nothing less than masterpieces of the porcelainists art”
“Even the foie gras bears no resemblance to the insipid mousse customarily served under that name: and I do not know many places in which a simple potato salad is made as it is here with potatoes firm as Japanese ivory buttons and patina’d like those little ivory spoons with which Chinese women sprinkle water over their new caught fish. Into the Venetian glass before me is poured, like a rich cascade of red jewels, an extraordinary Leoville bought at Mr Montalivet’s sale, and it is a delight to the imagination of the eye and also, I am not afraid to say it, of what used to be called the gullet, to see a brill placed before us which has nothing in common with those anything but fresh brills that are served at the most luxurious tables, which in the slow course of their journey from the sea have had the pattern of their bones imprinted upon their backs; a brill that is served not with the sticky paste prepared under the name of white sauce by so many chefs in great houses, but with a genuine white sauce, made with butter that cost five francs a pound; to see this brill brought in on a wonderful Ching Hon dish streaked with the purple rays of a sun setting above a sea upon which ludicrously sails a flotilla of large lobsters, their spiky strippling rendered with such extraordinary skill that they seem to have been moulded from living shells, with a border too depicting a little Chinaman who plays with rod and line a fish whose silver and azure belly makes it a marvel of iridescent colour.” 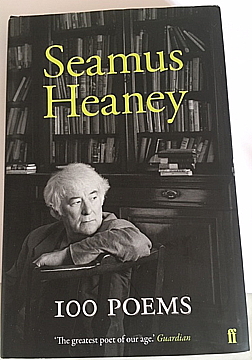 I put this together during the coronavirus lockdown. Goodness knows if Oysters are to be had anywhere, even for ready money. One of the first things I want to do is to sit in a restaurant with a plate of Oysters and a bottle of good white wine.

Our shells clacked on the plates.
My tongue was a filling estuary,
My palate hung with starlight:
And I tasted the salty Pleiades
Orion dipped his foot into the water
Alive and violated,
They lay on their beds of ice:
Bivalves: the split bulb
And philandering sigh of ocean,
Millions of them ripped and shucked and scattered.
We had driven to the coast
Through flowers and limestone
Sand there we were, toasting friendship,
Laying down a perfect memory
In the cool of thatch and crockery.
Over the Alps, packed deep in hay and snow,
The Romans hauled their oysters south to Rome:
I saw damp panniers disgorge
The frond lipped, brine-stung
Glut of privilege
And was angry that my trust could not repose
In the clear light, like poetry or freedom
Leaning in from the sea.
I ate the day
Deliberately, that its tang
Might quicken me all into verb, pure verb.