I’ve had to source some difficult ingredients for previous chicken soups – a kosher boiler chicken, memorably, and pepper from a particular province of Cambodia. This has to rank as the trickiest, though. For Mexico’s contribution to The Year in Chicken Soup I had to find a baby of less than 40 days old…

Let me explain. I have known Jesse, one of the cooks behind this month’s recipe, since I was eight years old. She was always the more daring one, always had itchy feet. At first, as tree-climbing kids, they dangled grubbily, from branches several feet above my head. Then—a little less dirty but still imbued with wanderlust—they wandered to Mexico City and founded a catering company called La Jacana with a friend, Jorge.

I had known for months that the two of them would be in the UK for the summer, doing private catering and hosting pop up restaurants around the country. So where my adventurous friend’s feet went, my imagination followed: I started to Google ‘Mexican chicken soup’.

Actually, this extended-foot-metaphor has sparked a sudden thought: Is this year-long project really just a test of whether you can you walk in someone else’s shoes by eating their comfort food? Or am I trying to teleport myself through my kitchen, to inhabit different shores and skins?

When Proust tasted his famous madeleine in A la Recherche du Temps Perdu, he experienced, ‘an exquisite pleasure, an all-powerful joy’ in which ‘at once the vicissitudes of life had become indifferent to me’. If comfort food is the most effective medium for time travel, stirring in adults powerful unconscious memories of our childhood, can recreating other people’s family-recipes create a portal into their interior lives, through which the cook can clamber?

It was during one of these attempted teleportations (otherwise known as, ‘another evening in the attic with the laptop and a large glass’) that I discovered the following about Mexico’s relationship with the globally ubiquitous chicken soup.

There is a Latin America-wide custom called la cuarentena, attached to new mothers. For 40-days postpartum, women were traditionally ‘quarantined’ in order to heal, rest and bond with their babies. Female relatives take over errands and chores.  Sex is banned. The woman’s body being considered vulnerable, she has to cover her head and neck and wrap her stomach in a cloth called a faja. She is also supposed to avoid washing her hair. Foods, too, are subject to embargoes: beans are blacklisted. On the approved list: carrots and chicken soup.

From the moment I read about la cuarentena, I knew not only that Jesse and Jorge would have to come and cook chicken soup here in my kitchen, but that I would need to find a new mother to eat it too. The hunt was on.

I should have known that when Jesse and Jorge arrived, they wouldn’t want to cook the plain, curative chicken soup most commonly fed to new mothers and known in Mexico as caldo de galina. Instead, of course, they arrived with plans for a fiesta. Before they had even touched the tarmac at Heathrow, their emails announced we were going to cook pozole, the chicken soup prepared all over Mexico to celebrate weddings, birthdays and New Year’s. 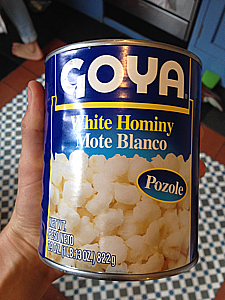 The history of pozole is, in fact, no less fascinating than that of caldo de galina: it has its roots in pre-Colombian ritual. Maize is one of its key ingredients – a plant that was sacred to the Aztecs.

According to research by the National Institute of Anthropology and History and the Universidad Nacional Autónoma de México, on special occasions, human prisoners had their hearts torn out in a ritual sacrifice, before the rest of their bodies were chopped and cooked up with maize into a pozole that was then shared among the community in an act of religious communion.

Of course, after the Conquest cannibalism was banned and pork replaced human flesh because, according to a Spanish priest, it “tasted very similar”. These days, it’s very commonly made with chicken. Phew.

So, a slight change of plan. But the birth of a baby seems like the best possible reason to celebrate. And since most of the new mothers I know are now living miles, if not continents, away from their female relatives, it’s down to us friends to pull together around them. What better way to look after them than to cook something nutritious? I decided to throw a cuarentena party. I just needed to find the right mother.

And find her I did, in the nick of time, in the form of Delphine. A French dancer living in London with her husband Johnny and son Roman, she had just given birth to the very beautiful and very tiny Gustave.

Jesse and Jorge arrived laden down with four different kinds of dried chillies, direct from one of Mexico City’s many markets, a couple of tins of cacahuazintle maize (which, when opened, looked like cotton earplugs suspended in a suspicious solution) and, critically, Jorge’s family recipe for pozole. “My Grandmother is going to be so, so proud of me,” he smiled, laying out the ingredients.

The table was set with Mexican banners and fabrics, a whole chicken submerged in water and set to simmer in the now familiar fashion, and everything was now ready for our guest of honour to arrive... 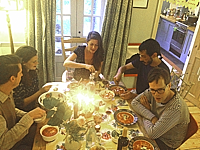 Delphine—a dancer, and mother of Gustave
Johnny—Gustave’s father, Delphine’s husband and a film maker
Sarah—thirty-five weeks pregnant with twins. Staggering heroically. As if that weren’t enough, also a locations manager
Cesca—a stylist (and impossibly stylish too)
Jorge—chef 1
Jesse—chef 2
Me
Tom—my husband
Roman—Delphine and Johnny’s older son, 3, who had a bit-part as the soup kept tempting him down from his temporary bed upstairs
Gustave—three weeks old. Asleep, but toasted repeatedly

“¡No quemar los chiles!” admonished Jesse – ‘Don’t burn the chillies!’ reminding me of my first ever chicken soup, avgolemono, which began with the strict instruction: ‘Don’t split the eggs!’

In every other respect, though, this soup was different to all those that had come before. Most obviously, there was its colour: a fiery, ritualistic red, burnished by the chillies that Jesse had fried, then soaked, then pureed and finally stirred into the broth.

It tasted of hot dusty landscapes, of dusty boots, and late night food stalls with the sound of crickets and mariachi music heavy in the air... “It tastes of home,” said Jorge, his eyes momentarily closed. The soup had done its work, transporting him home. It had, however, taken me to the Mexico of my imagination, which, I now realised, was constructed principally on the foundations of Disney’s Speedy Gonzales. 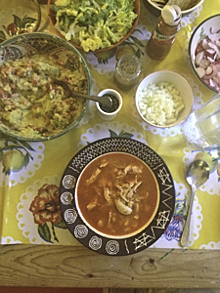 The fiesta, though, was real. Plates of radish, chopped lettuce, tortillas and onion were passed around.Bottles were opened and passed round, seconds served up. Roman sat on laps, tried some soup, hid under the table, and was carried back to bed. At some point, we realised that all the bottles were empty and someone was sent out for more.

The conversation turned to families far away. “It’s always food you call home for,” said Delphine, “You’re ok on your own in a new country but it’s that recipe for beef stew you need to pick up the phone and call your mum in France for.” Sarah called home to Ireland for paté and ‘Polish cake’. Later, it moved to corruption and to Mexico’s missing students: 43 of them who were ‘disappeared’ during a protest, their bodies incinerated in a remote rubbish tip and their remains tossed in a river; to how a country could be perfect despite its glaring imperfections; to how lucky we were to live in a country which, while flawed, was functional.

Suddenly it was 11.52pm: seven minutes till the last train was to leave from our local station. Bags were snatched up, coats shoved on, and hugs rapidly exchanged.

The next morning I called Delphine to see how her cuarentena party had been for her. “The soup was DELICIOUS!” came the reply. “Very light and nourishing. It left me very happy and contented.” Another winner, then. Arriba arriba. 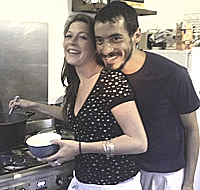 - Make chicken stock with the following: one whole chicken, onion, bay, garlic, carrot
- Drain it and skim off some fat
- Shred the chicken and put to one side
- Lightly fry 8 guajillo chilies and 1 morita chili, then soak them in hot water
- Liquidise  them with some of the stock
- Add 2 big tins of pozole corn (maiz cacahuazintle) to the stock
- Add the liquidised chile mix to the stock, and the shredded chicken
- Add some epazote (a Mexican herb) if you can get hold of it, and salt
- Finish with finely chopped onion, radish, lettuce, dried oregano, corn tortillas and some chile de arbol salt (made by dry toasting in a pan - without burning! - three arbol chillies then blending them and mixing with salt).

La Jacana was at the Three Compasses in Dalston and are also available for private events. Check www.facebook.com/la jacana  for more information or to get in touch with them directly.