Join Hattie Garlick at Hackney's Ridley Road market to find the ingredients for her latest recipe, a soup so substantial that it was served with knife and fork...

There’s a proverb among the Akan, the largest ethnic group in Ghana, that says: “The good soup comes from the good earth.”

It acknowledges the fact that, at the heart of a wholesome soup are its fresh ingredients and a nourishing soil from which to pull them. In the case of this particular good soup, however, once it had travelled 5,000 from its African homeland, it came from a good, grimy, inner-city street market.

But let’s go back a step or two. Trying to decide on my next chicken soup, and a little overwhelmed by the billion broths, brews and bouillons that were flooding my inbox, I went to see Connie Smith, an old friend and a PhD student in social anthropology.

As is usually the case, she set me straight with a cup of tea and a good story. “I learnt this recipe from Mama Juliet,” she began, “a large, indomitable woman from Asamankese, a small town in the eastern region of Ghana. For three months I lived with Mama Juliet, her daughter, two sons and prized dog, Brutus, who she barely let out of her sight as she was obsessed with the idea that people were trying to steal him.”

“It was a real culinary adventure: Ghanaian food (or more specifically, Akan food) was like no other I had tried. I spent a lot of time in the kitchen, attempting to help out but mostly sitting and chatting. Over three months I sampled all kinds of things, including giant African land snails, bats, rainbow bread, jollof rice, soft shell crabs, grasscutter (a kind of large forest dwelling rodent) a lot of fufu (starchy stretchy carb made out of pounded plantain, yam or cassava) tons of dried fish and litres of red palm oil.  My favourite though was groundnut soup.” 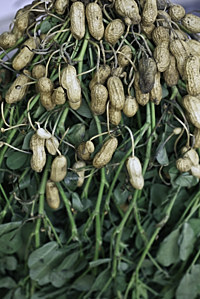 Groundnut soup, or in Akan ‘Nkatenkwan’, is a staple across West Africa, though it’s also known as peanut or peanut butter soup, since it’s now been centuries since Spanish traders brought peanuts to the continent from South America and they supplanted the native Bambara groundnuts.

According to Fran Osseo-Asare, founder of the African Culinary Network Betumi, it was around the same time that the villainous tsetse fly made cattle-rearing impossible in much of Ghana. Without milk or dairy products, people were forced to find inventive ways to make their soups rich and creamy. Melon was used, okra too, but ground peanuts were by far the most successful solution.

The classic 1969 cookbook Ghanaian Favourite Dishes by Alice Dede lists over 200 of the nation’s traditional recipes including, of course, Nkatenkwan. Her instructions are as follows:

Roast and peel the groundnuts and pound them till they look like melted chocolate. If chicken is used, prepare it and put it on to boil with the water, then add the ground pepper, sliced onions and washed whole tomatoes which when tender remove and grind and add again to the soup. Mix the groundnuts with a little water and stir into the soup. Allow to boil for half an hour. Add salt to taste.’ 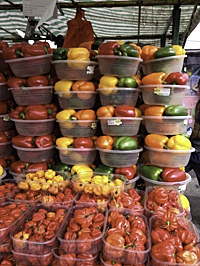 It seemed simple enough, though the units of measurements left me a little baffled: ‘1 cigarette tin of groundnuts’ and ‘1 beer bottle of water’. Apparently these were once standard units of measurement in a country that required a little entrepreneurial thinking from its citizens.

“It takes a long time to cook in Ghana, as it usually requires grinding the ingredients by hand. You can cheat though by using peanut butter and/or a blender.

Ghanaians love chilli: a lot of dishes are incredibly powerful, laced with scotch bonnet peppers. My tolerance after 3 months was greatly increased... If you're not used to such fierceness, reduce the chilli accordingly, or replace with milder chillies.”

Since ‘good earth’ is in very short supply in the suburbs of East London, I headed instead for Ridley Road Market in Hackney.

There have been market stalls in this grimy corner of the city since well before 1927, when the regulation of street markets began. In the 1930s, Oswald Mosley and the Blackshirts held meetings at one end, and there were regular skirmishes with the local shoppers and traders in what was, then, a predominantly Jewish market. 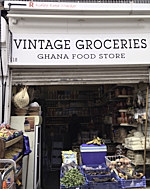 I find okra—offloaded in large plastic tubs, a pound a bowl; palm oil and peanut butter with enticingly unfamiliar packaging nestle in the recesses of the ‘Vintage Groceries Ghana Food Stores’; I’m dazzled into purchasing six meters of African wax print fabric from a wall of blinding colour.

Music pumps out from the stalls, vibrating down the tarmacked street and through the soles of your feet, lifting your imagination above the stench of offal, over waves of spices, far from the urban scene to a Ghanaian beach paradise.  Sadly, the illusion was shattered by the shaking that it was subjected to on the number 48 bus ride home. 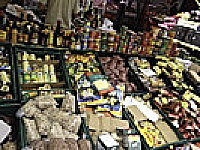 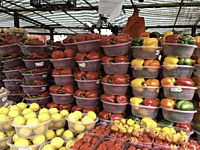 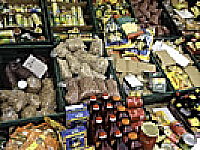 A whole chicken
About 300g of groundnuts (or peanut butter)
Okro (okra), about 10
Scotch bonnet peppers (or milder chillies to taste)
Palm oil
Stock cube (in Ghana, the ubiquitous Maggi is essential!)
Can of tomatoes
3 onions
Root ginger
Water 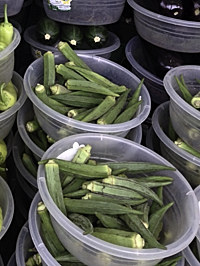 - Chop the chicken into pieces (not necessary to joint it neatly).
- Grind peppers in a pestle and mortar. Use chillis to taste, removing seeds if desired [note from HG: I used one whole scotch bonnet and found it packed a powerful punch, just the right side of eye watering].
- Peel the onions, chop into large pieces. Peel and chop ginger. Add chicken, onion, chilli peppers, ginger, okro to a large heavy based saucepan. Crumble over stock cube, stir to combine and coat chicken. Add a little palm oil, (or a lot if you're west African) when it starts to sizzle stir again. Add a little water, cover and steam for about 10-15mins.
- Make your groundnut paste: this involves very rigorous grinding of toasted ground/peanuts, or pulse blending until oils are released. I recommend you use premade peanut butter...
- Put peanut butter in a bowl, add a little boiling water, a few drops at a time, to loosen it. stir continuously to make a smooth thick paste.
- 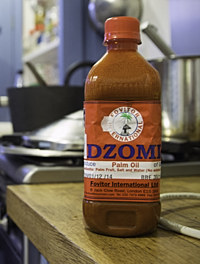 Heat a little palm oil in a pan over a low heat, then add the peanut butter paste. Stir continuously until oils start to separate: you will notice orangey oil collecting on the surface.
- Once the oils have separated, add about a litre of hot water and bring to a simmer. Add to the steamed chicken and veg mix. Add the can of tomatoes, mashed.
- Cook at a low simmer for 30mins. Use a slotted spoon to remove all veg, grind till smooth and return to the pot. The soup should be creamy and smooth apart from the chicken pieces. Continue cooking until the chicken is very tender and the peanut and palm oils start to collect on the surface of the soup.
- Season to taste (if you used salted peanut butter it probably won't require any further salt).

You can serve with plain rice, or for more authenticity make some rice balls. Cook unwashed white rice until sticky, then form into large balls. You can do this by shaking rice between two cereal bowls to form a compressed ball. Properly, they are shaped using bowls made from half a gourd. The ball should sit like an island in the soup. Eat with your fingers and enjoy!

The soundtrack to supper

Highlife, a musical genre that dominated Ghana for half of the 20th century, is impossible to pigeonhole. It takes in traditional music, colonial marching bands, church music, jazz, blues, Latin, funk... You name it, Highlife has it. What’s not to like?

It was, quite simply, delicious. Possibly, the best chicken soup yet. Rich peanut, cut through with fiery chilli, but creamy and thick enough to be strangely reminiscent, to a Brit raised on Heinz tins, of the homeliest tomato soup.

Just like its musical accompaniment, Highlife, this soup is made of the stuff to put a life-loving smile on your face against the odds, yet it defies categorisation and is impossible to put into words.

All I can say, emphatically, is EAT THIS SOUP. You won’t regret it.