A Year in Chicken Soup 8 - Cock-a-leekie

Join Hattie Garlick for the final instalment of A Year in Chicken Soup. After twelve months of culinary globetrotting via soups from Cambodia to Syria, Mexico to Nigeria, she returns to these shores for a final get-together with friends old and new round a soothing bowl of Cock-a-Leekie.

It isn’t really fair. Twelve months truly isn’t time enough to take in all the global permutations of this wonder soup. There were still so many chicken broths to strike off our list: renshen jitang, a Chinese medicinal dish flavoured with ginseng; Portuguese Canja; Persian Gundi; Puerto Rican Sancocho...

But here we are, at the end of our year-long culinary voyage. New food adventures are on the horizon and with Burns Night beckoning, there was really only one dish we could choose to round off our year in chicken soup: Cock-a-Leekie.

Besides, with my head now full of global chicken soup stories, the story of this Scottish broth somehow seems emblematic of them all. Nobody really knows when and how it originated, its source is lost in the mists of time and the myths of a place.  The first written recipe seems to have appeared in 1598 but the name itself didn’t make an appearance till the 18th century. Because, of course, the best recipes don’t need writing down.

As with each of the chicken soups we’ve cooked over this year, they exist in grandmothers’ heads, in the gossip within family kitchens, the muscle memory of fingers that scrub potatoes, the olefactory subconscious that knows how much spice to add, not by a note in a book but a waft of the steam escaping from a pot.

It is also, like all its soupy siblings, oxymoronic: firmly and absolutely rooted in one place—Scotland’s National Soup, they call it, traditionally served up at Burns Night and St Andrew’s Night dinners—and simultaneously globetrotting.

Cock-a-Leekie, perhaps more than any other, symobolises the tenacity of chicken soup, its ability to adapt to and take root in, any culture and climate. It’s thought that it probably originated in France, where it was a chicken and onion soup, making its way to Scotland by the 16th century where the onions were ousted by leeks—a favourite in a country where winters can be tough and cold but the leek still grows. 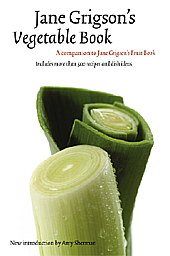 (Jane Grigson, by the way, takes a fascinating detour into ‘the social collapse of this historic vegetable’ in her Vegetable Book. It disappeared, she notes, from the tables of the gentry in the 16th and 17th century, at least in part because digestive systems were plagued with problems in that era — due to fruit and veg poor diets — and a fear of ‘tainting the breathe’ with leek, onion and garlic was consequently widespread.)

Despite its celebrated place at the feast table, Cock-a-Leekie is also a peasant food at heart, just as all our other chicken soups have been. Food historians have hypothesised that prunes were a later addition to the recipe, making their way in at a time when meat was scarce to bulk up and add nutrition to the broth.

Over the last twelve months I’ve met Cambodian expats, Syrian refugees, Mexican travellers, all of whom were happy to share their stories and their soups with me. Now all I needed was for one of my Scottish friends to offer up their granny’s recipe. Except no one seemed to have one.

I could find instructions for cooking it online and in books, of course, but I didn’t want to break the rules in the homestretch of the project. This recipe, like all the others, had to come from someone’s family heritage. I hunted and pleaded and grew increasingly frustrated. I wondered if, unlike the other expats I’ve met along the way who have been flung far from their roots, my Scottish friends just didn’t feel far enough from home or wrenched sufficiently from their traditions and the familiar to incite them to cling to their cultural comfort foods?

Finally, a friend of a friend came through. Fraser Hughes’ granny had an ancient recipe that his whole family loves. So we gathered together some of the people we do too: from Rachelle, who gave us her mother’s Jewish chicken soup recipe at the very beginning of our adventure, to brand new baby Maceo, who was still in utero when his mother came to our Syrian soup supper last month.

There were two sets of grandparents, 12 children, a Spanish visitor... A pregnant Scot who had recently moved into the area and was mourning the lack of a Burns Night party was invited along. Perched on sofas, stools and the floor, the grown ups toasted Fraser’s granny and her truly delicious soup. And we all raised a glass to the thing that had brought us together, whatever our origins and age: “TO CHICKEN SOUP!” 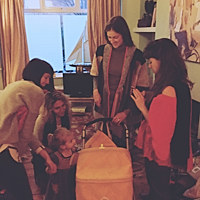 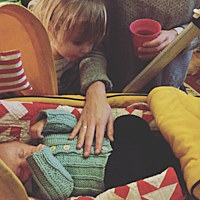 *Fraser doesn’t include prunes in his recipe but since most other recipes do, and most Scots I spoke to eulogised over their place in this soup, we rather controversially added a handful into the soup when we made it (they were rather delicious...) 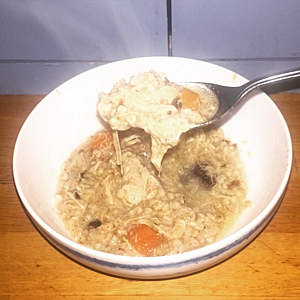 - Get a large pot and brown the chicken in a little vegetable oil then set aside.
- Chop the carrots, celery and the greens of the leek into large chunks and put into the pot.  Brown for a couple of minutes and then add the chicken back to the pan along with the garlic, thyme, pinch of peppercorns, parsley and a generous pinch of salt.
- Cover this with hot water and then simmer for around 40 minutes to an hour on a low-medium heat.
- Remove the chicken from the pan and place to the side, strain the liquid and remove all the veg etc.
- Shred the chicken with a fork and a knife and then place back into the strained broth.
- Chop the remaining whites of the leeks and add back to the broth along with the rice.
- Cook until the leek is soft but still with a little bite and the rice is cooked.