Have you read Only in London, by Hanan Al Shaykh? There’s a passage in it that describes one of the main characters, freshly arrived in the UK, making a to-do list. ‘This is going to become my country’ she writes, ‘I’ve stopped living a temporary life. And so, she must learn to speak English properly, look for a job and ‘Stop eating Arab food – not because the garlic and coriander make my breath smell, but because this kind of food makes me feel safe and secure and reminds me of childhood and home.’

I was reminded of it when I began looking for a Syrian chicken soup recipe. Logging into Facebook, I was hunting through friends scattered across the world, making fleeting online acquaintances with refugees flung across its oceans.

Online searches are like sinking a ladle into a vast vat of soup – you never know what you will bring to the surface.

This time, the word I stirred up, time and time again, was ‘Shakriyah’, a yoghurt based soup, typically made with chicken.  I needed only to type the word and strangers would immediately open up to me online. “That dish is the epitome of comfort food for me and my family“ wrote one refugee, now living in Turkey.

‘Food, Fairouz, my mother's jacket...’ I read on another feed. ‘They all remind me that I need to belong to a new land. It’s so hard to start from zero. It’s so hard to pretend you don’t miss your home...’

And finally, from a friend: ‘My friend Hassan has the BEST recipe, which is in his head and which I just ate in Germany, healing my cold and my blues.’

She had seen him just a few days ago. It was hard to reach him by phone, she wrote, but she would try to make contact, and persuade him to share his recipe. We emailed back and forth for days, details of Hassan’s extraordinary life rising up through the soup, until a message finally pinged into my inbox: “I got the recipe!”

Hassan Ajjawy is 47 and from Yarmouk, the Palestinian neighborhood in Damascus. Since February 2014, he has been in Friedrichshafen, a German university city near the borders of Austria and Switzerland. His life is suspended till he hears what decision has been made on his asylum request. So far, that wait has lasted two years. He has heard nothing.

He has three children. When war broke out, they fled to Russia with their mother. They are still there.

A tall man, in his late twenties he took up bodybuilding as a hobby and won a ‘Beach Body of Syria’ competition. He still has a rugby player’s build, though now, in mid-age, it has softened to reflect ‘the big, teddy-bearish dad’ that he is.

He studied economics at Damascus University. He ran a men’s clothing store during most of his working life. He cooks to relax and, friends say, cooks everything very well. His friends say that “he could, theoretically, even cook a donkey and turn it into a feast” but he has yet to try...

Shakriyah is his comfort food, the ‘go-to’ dish he falls back on for himself, his family and his friends. He usually makes it with chicken, but last week he made it with beef (it was great, my friend tells me, but she likes the chicken best).

When he cooks, he likes to sip a glass of vodka, whisky or Turkish raki. He never cooks from a recipe and so is a little nervous about sharing this one with us since he has never written it down before. Instead, he says, he cooks by, “feeling the food. If you don’t feel the food, it won’t be delicious.” He must always feel it, friends say, because it’s always delicious.

The recipe: Shakriyah with chicken 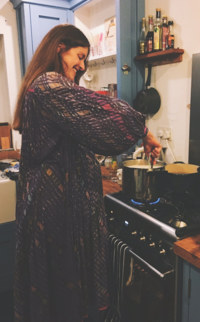 - Remove the skin from the chicken but don’t throw it away. Place the quartered, skinned chicken in a pot. Add the skin separately. And then fill a stock pot with water. Boil at high heat for ten minutes. Drain chicken and skin and discard the water. Set chicken and skin aside.
- In the stock pot, add six cups of water and boil. Add salt, pepper, cinnamon and cardamom pods. Add the chicken and skin again. Cook at medium heat for one hour.
- As the chicken cooks, prepare the yogurt. First put yogurt into a big bowl. Add the beaten egg and the lemon salt/citric acid. Stir until blended.
- Then stir the cornstarch in a glass of cold water until it is blended well (it will look like a glass of milk). Stir the milky cornstarch mixture into the yogurt mixture. If you have an electric mixer, it’s easier to use this, but you can mix it by hand. Mix or stir until it is well blended. 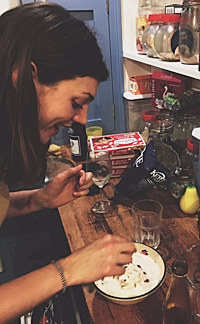 - After the chicken is cooked, shut off the heat and remove the skin and cardamom pods.
- Then place the yogurt mixture in a large saucepan over medium heat. Stir it continuously until it starts to bubble. Then turn down heat to low.
- Add the pieces of chicken to the yogurt mixture. Put two glasses of chicken stock into the yogurt-chicken mixture as well as the crushed garlic. Stir it a little bit and cook on low heat for five or ten minutes. Turn off the heat and finish.

NOTE: DO NOT COVER THE YOGURT AND CHICKEN MIXTURE WHILE COOKING OR AFTERWARDS. Let the shakriyah BREATHE.

- Now prepare the rice. Wash the rice, if needed. Place a big saucepan on the stove and turn the heat on to medium-high. Add a half of a cup of sunflower oil and one to two big tablespoons of butter. Heat until warm. Then stir in two glasses of rice. Stir until coated with oil-butter mixture.
- Add four glasses of the chicken stock. Turn heat to high until mixture just boils. Then turn down the heat to LOW and cover it and let it cook for half-hour.
- Now we are finished!

How do we eat this shakriyah?

Fill a giant bowl about a third or half way with rice. Add chicken and spoon in hot yogurt soup. As a side dish, you can also include a bowl of green olives and pickled vegetables. 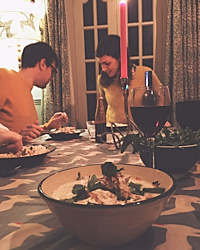 With Christmas just days away, it seemed a good time to gather my own, cobbled together community around me, to cook and eat this lastchicken soup of 2015. After all, as the senior political writer for Cosmopolitan, Jill Filipovic, recently tweeted: “This refusing to offer refuge to fleeing Syrians reminds me of a story, something about a pregnant couple and innkeepers w/ no room? Anyone?” 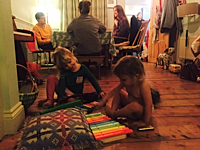 As the light faded, six adults and five kids cooked, ran riot, gossiped and bickered. We gathered warm winter clothes that the smallest amongst us had outgrown, and packed them into boxes to donate to young refugees. We explained what we could of the global context to the kids, and admitted to each other how little we understood. We raised glasses to Hassan and felt enormously grateful: to him for the recipe; to luck for placing us here, together, with the central heating on and a healthy stock of wine and food in the kitchen.

When our guests peeled off, carrying tired children in their arms, I surveyed the trashed sitting room, the piles of washing up, the toys tipped out of every box and across every surface and I thought: so what if, by sharing in someone else’s comfort food, you can’t share, completely, in their story and heritage? It still inches people closer — across borders, global conflicts, languages, histories and sometimes simply tables — than anything else in the world is able to.

A group of students from Zeppelin University in Friedrichshafen are trying to help Hassan and other refugees gain employment. They want to help Hassan start a restaurant. Their organization is called Welt Raum and you can find more details here: http://welt-raum.org/

Our box of clothes, boots and blankets were sent to the ‘One Worn Every Minute’ collaboration between Mum and Dad Life (http://madlife.co.uk/) and Help Refugees (http://www.helprefugees.org.uk/) They are accepting good quality, second hand children’s clothes, such as waterproof winter coats and boots, and will distribute them among young Syrian refugees this winter. Send donations to: Help Refugees, Big Yellow Storage, 401 High Road, East Finchley, N2 8HS, mark the parcel ‘one worn every minute’.