Vitamin E is a group of related compounds primarily divided into two forms, tocopherol and tocotrienol. In each group there are alpha, beta, gamma and delta forms, giving a total of eight molecules.

Vitamin E is found in wide variety of foods. But it is a little complicated.

The most common and active form of vitamin E, with the greatest nutritional significance, is the alpha-tocopherol form. What you get in a supplement is pretty much a synthetic form, which is only about 50% as active as the natural one. Of all the forms, the body preferentially uses alpha-tocopherol, and only alpha-tocopherol supplementation can reverse vitamin E deficiency symptoms.

Vitamin E can be found in many foods. Therefore, you can get recommended amounts of vitamin E by eating a variety of foods. All eight forms of vitamin E occur naturally in most plant-based foods in varying amounts. It is fat soluble so the major sources of alpha-tocopherol include many vegetable oils (e.g. olive oil, sunflower oil (one tablespoon contains 5.6 mg vitamin E) and safflower oil), nuts especially almonds (28 g contain 7.3 mg vitamin E) and hazelnuts, whole grains and legumens. Plant seeds are also among the best sources of vitamin E, especially sunflower seeds (28 g containing 7.4 mg vitamin E).

Food companies also add vitamin E to some breakfast cereals, fruit juices, margarines and spreads, and other foods. To find out which ones have vitamin E, check the product labels. 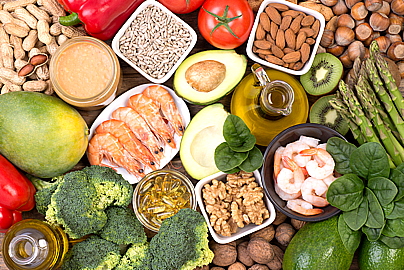 In the body, alpha-tocopherol acts mainly as an antioxidant, neutralising unstable free radical molecules to protect the body's cells against damage from harmful oxidative stress. Fats, which are an integral part of all cell membranes, are especially vulnerable to damage through lipid oxidation by free radicals. alpha-tocopherol’s structure is uniquely suited to intercept free radicals and thus prevent damage to lipids. It also protects vitamin A from damage.

Free radicals are compounds formed when our bodies convert the food we eat into energy. People are also exposed to free radicals in the environment from air pollution and ultraviolet light from the sun, for instance. These harmful molecules contribute to many chronic diseases, from cancer, to heart disease to vision loss. Our bodies also use their own oxidative mechanisms, through producing free radicals to kill bacteria and cells that are on their way to cancer.

The body also needs alpha-tocopherol to boost its immune system and to help to widen blood vessels and reduce the blood’s ability to clot within them. In addition, cells use vitamin E to interact with each other and to carry out many important functions.

Aside from maintaining the integrity of cell membranes throughout the body, alpha-tocopherol protects the fats in low-density lipoproteins (LDL cholesterol) from oxidation. Oxidized LDLs have been implicated in the development of cardiovascular disease. It also plays a role in immune function and blood clotting.

Fortunately, vitamin E deficiency is pretty rare in healthy people, as we store it efficiently and recycle and reuse it if necessary. Deficiency is mostly linked to certain diseases in which fat is not properly digested or absorbed (e.g. Crohn's disease, cystic fibrosis, liver disease), to certain rare genetic abnormalities and also to people who are taking little fat in their diets. The efficiency of vitamin E absorption increases with the amount of fat in ingested food. Therefore, vitamin E absorption from supplements is likely to be minimal with low-fat meals. Vitamin E needs fat for the digestive system to absorb it.

Severe vitamin E deficiency has been observed as a result of malnutrition.

Severe long term vitamin E deficiency can mainly cause nerve and muscle damage that results in loss of feeling in the arms and legs, muscle weakness, numbness, walking difficulties, tremors, damage to the retina of the eye (poor vision) and poor immune function.

Cigarette smoking is also thought to increase the utilisation of alpha-tocopherol such that smokers might be at increased risk of deficiency compared to non-smokers.

Vitamin E supplements come in different amounts and forms. The main thing to consider when choosing a vitamin E supplement is the form of vitamin E. As stated above although vitamin E sounds like a single substance, it is actually the name of eight related compounds in food, including alpha-tocopherol. Each form has a different potency or level of activity in the body.

Vitamin E from natural food sources is usually listed as "d-alpha-tocopherol" on food packaging and supplement labels. The natural form is more potent. For example, 100 IU of natural vitamin E is equal to about 150 IU of the synthetic form. Some vitamin E supplements provide other forms of the vitamin, such as gamma-tocopherol, tocotrienols, and mixed tocopherols.

There are a number of animal and observational human studies which suggest that utilizing considerably higher doses of supplemental vitamin E bring many health benefits. For example, high doses (>400 IU/d) of vitamin E intake is considered to be very beneficial for lowering the risk of cancer, heart diseases, cataracts and dementia. However, in contrast, there are randomized controlled clinical trials investigating the prevention of such chronic diseases which do not support the idea of a preventative effect of supplemental alpha-tocopherol.

In fact the evidence is clear that not only is excess vitamin E not beneficial but it can be harmful, in many cases even showing an increased risk of death. Therefore, experts recommend against consuming supraphysiological doses of supplements to prevent cancer or cardiovascular diseases. This could be because when you take vitamin E out of food, where it exists as a network with its helper molecules, and give it as a supplement, you don’t get the beneficial effects in quite the same way.

The only exception for such vitamin E supplementation, is its use for preventing blindness due to age related macular degeneration (AMD), where randomized trials have generally proved positive for managing the disease.

Getting vitamin E from foods is not risky or harmful. Overdosing on vitamin E is difficult when it is obtained from food sources. Toxicity has only been reported after people have taken very high doses of supplements. Few side effects have been noted in adults taking supplements of less than 2000 mg of alpha-tocopherol daily (either natural or synthetic vitamin E). The most worrisome possibility is that of impaired blood clotting, which increases the likelihood of hemorrhage in some individuals.

Given the potentially adverse effects, do not take vitamin E supplements unless you have AMD and are taking the vitamin in consultation with your health care provider. If you take a multivitamin, make sure it does not contain more than 100 to 200 IU of vitamin E, although even these levels are quite a bit higher than necessary.

Age-related macular degeneration, the loss of central vision, in elderly, and cataracts are among the most common causes of vision loss in older people. Among people with AMD at high risk of developing advanced AMD, a supplement containing large doses of vitamin E combined with other antioxidants plus zinc and copper showed promise for reducing the progression of vision loss.

High doses of supplemental vitamin E may interfere with the vitamin K-dependent blood clotting cascade and increase the risk of bleeding, by reducing the blood’s ability to form clots after a cut or injury, and of serious bleeding in the brain, known as hemorrhagic stroke in vitamin K deficient individuals. Because of this risk, the established, tolerable upper intake limit (UL) for adults is specifically 1000mg/day of alpha-tocopherol in any supplement form (equivalent to 1500 IU/day for supplements made from the natural form of vitamin E and 1100 IU/day for supplements made from synthetic vitamin E). The upper limits for children are lower than those for adults.

Vitamin E dietary supplements can interact or interfere with certain medicines that you may be taking. For example, high doses of vitamin E can increase the risk of bleeding in people taking anticoagulants or antiplatelet drugs. Individuals taking anticoagulant drugs like warfarin and those who are vitamin K deficient should not take vitamin E supplements without medical supervision because of the increased risk of bleeding.

Also, in one study, vitamin E plus other antioxidants (such as vitamin C, selenium, and beta-carotene) reduced the heart-protective effects of two drugs taken in combination (a statin and niacin) to affect blood-cholesterol levels. Further research is needed on potential interactions between antioxidant supplementation and cholesterol-lowering agents like statins.

Taking antioxidant supplements while undergoing chemotherapy or radiation therapy for cancer could alter the effectiveness of these treatments.

A number of drugs may decrease the absorption of vitamin E. For example, the anticonvulsant drugs phenobarbital, phenytoin (Dilantin), and carbamazepine (Tegretol) may lower plasma vitamin E concentrations in individuals with epilepsy.

You must tell your doctor, pharmacist, or other healthcare providers about any dietary supplements and drugs that you take. They can tell you if those supplements might interact with your prescription or over-the-counter medicines, or if the medicines might interfere with how your body absorbs, uses, or breaks down nutrients, in this case Vitamin E.