Vitamin C, also known as ascorbic acid, is an essential water-soluble dietary nutrient present in all primates. Unlike most mammals and other animals, humans do not have the ability to make vitamin C and must therefore obtain it from their diet.

Of all the supplementary vitamins, vitamin C is the UK’s most popular single vitamin, with annual sales adding up to about £36 million, due to the widely held belief that it is beneficial to increase the amount of vitamin C in the body on top of what is normally consumed through food. 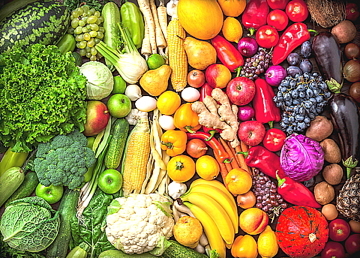 Surprisingly, although it is well known that citrus fruits are rich in vitamin C, sweet red peppers actually contain nearly twice as much per serving. Furthermore, a glance at product labels makes it clear that some types of food and beverage have been fortified with vitamin C.

Vitamin C has two major functions: as an antioxidant and as an enzyme co-factor.

As an important and highly potent antioxidant, vitamin C can protect very important molecules in the body, such as proteins, lipids (fats), and carbohydrates, even in the smallest amounts. In addition, it protects DNA and cells from damage caused by free radicals that are generated by either immune cells to attack pathogens, or through exposure to toxins and pollutants—e.g. certain chemotherapy drugs and cigarette smoke. Vitamin C does so simply by neutralizing these unstable molecules. It also stabilizes a number of other compounds including vitamin E and folic acid.

More importantly, vitamin C is a crucial co-factor for making several critical biomolecules, especially the formation of collagen, a protein which lends structural support to tendons, ligaments, bones and blood vessels and is a prerequisite for knitting together wounds in healing. In addition, it boosts the immune system to work properly and increases iron absorption from food.

Furthermore, Vitamin C is involved in the metabolism of cholesterol to bile acids, which may have implications for blood cholesterol levels and in the incidence of gallstones, and it also helps make the neurotransmitters.

The amount of vitamin C you need each day depends on your age. Average daily recommended amounts range from 15 to 45mg daily in children, to 75mg per day for most women and 90mg per day for men. For pregnant or lactating women and for the elderly daily requirement rises to 120mg. This is based upon the minimum requirement to prevent scurvy. Requirements for smokers however, are increased substantially (see below).

The provision of dietary vitamin C is highly dependent on food preparation, because oxidative conditions can destroy active vitamin C in foods. Vitamin C content within food can be reduced by prolonged storage and by cooking. Steaming or microwaving may lessen cooking losses. Fortunately, many of the best food sources of vitamin C, such as fruits and vegetables, do not require cooking and are usually eaten raw.

• People who smoke and those who are exposed to secondhand smoke: Since smoke increases the amount of vitamin C that the body needs to repair damage caused by free radicals, people who smoke, need 35mg more vitamin C daily than non-smokers. This also applies to drug and alcohol abusers.
• Infants: Breast milk provides an adequate amount of ascorbic acid for newborns and infants. On the other hand, infants who are fed evaporated or boiled cow’s milk are at risk because cow’s milk has very little vitamin C and heat can destroy vitamin C. Cow’s milk is not recommended for infants under 1 year of age and infant formula, therefore has the recommended amounts of vitamin C.
• People who eat a diet very limited in fruits and vegetables: similarly, those living in poverty and the severely malnourished are vulnerable to scurvy.
• People with certain medical conditions: These include severe malabsorption, some types of cancer, and kidney disease requiring hemodialysis are also at risk.
• Older adults (>50 years): Although it is not yet known with certainty whether older adults have higher requirements for vitamin C, intake amongst some older populations have been found to be considerably below the required daily dose of 75 and 90mg daily for women and men. However, in reality, elderly populations have higher vitamin C requirements, since the efficiency of the cellular uptake of vitamin C declines with age. It may therefore be important to maximize blood levels of vitamin C in order to protect against free radicals that cause oxidative damage to cells and biological molecules. A vitamin C intake of at least 400mg daily may be particularly important for older adults who are at higher risk for age related chronic diseases such as heart disease, stroke and cataract.

The symptoms of vitamin C deficiency include poor wound healing and lethargy, resulting largely from the impairment of collagen synthesis and disordered connective tissue. Deficiency gives rise to the disease known as “Scurvy”, which is very rare nowadays. Scurvy has been known for many centuries as a potentially fatal disease and has had a prominent role in history. The clinical manifestations of scurvy were well described in Ancient Egyptian, Greek, and Roman literature. British and European explorers of the Renaissance era were ravaged by scurvy. It was a major cause of morbidity and death in much of Europe during the Great Potato Famine, during the United States Civil War, the Exploration of the North Pole, and the California Gold Rush. By the late 1700s the British Navy was aware that scurvy could be cured by maintaining a diet rich in citrus fruits and vegetables. Captain James Cook (1728–1779) was one of the first to demonstrate that sailors who spent months at sea could avoid scurvy by maintaining a diet rich in vegetables.

Despite such advancements in determining how to protect people from developing scurvy, vitamin C, ascorbic acid, was not found until the early 1930s, when it was isolated from cabbages, oranges, paprika and adrenal glands, and was subsequently found to prevent the development of scurvy.

Such symptoms appear to be related to the weakening of blood vessels, connective tissue, and bone, which all contain collagen. Signs for scurvy appear within a few months of a vitamin C deficient diet. Scurvy is rare in developed countries because it can be prevented by as little as 10 mg of vitamin C daily. However, cases have occurred in children and the elderly living on very restricted diets.

Many people take high dose vitamin C for colds, but does it work?

In the past 40 years, numerous clinical trials have examined the effect of vitamin C supplementation on the prevention and treatment of common colds. Most of the recent research has shown vitamin C in large mega doses (up to 2 grams daily) having no effect for preventing common colds. Also, no significant effect resulting from vitamin C supplementation (1-8 grams/day) was observed in therapeutic trials in which vitamin C was administered after cold symptoms occurred.

However, a benefit of regular vitamin C supplementation was observed in that it shortened the duration of colds, with a greater benefit in children than in adults. One of the reasons that this vitamin helps with colds could be its antihistaminic effect. Vitamin C helps with the swelling in one’s sinuses or one’s nose that is typical of colds.

Vitamin C supplements are available in many forms, but there is little scientific evidence that any one form is better absorbed or more effective than another. Most experimental and clinical research uses ascorbic acid or its sodium salt, called sodium ascorbate. Natural and synthetic ascorbic acid are chemically identical and there are no known differences in their biological activities or bio-availabilities.

There is no reliable scientific evidence that large amounts of vitamin C (up to 10 grams/day in adults) are toxic or detrimental to health, but there are concerns of kidney stone formation with vitamin C supplementation. High levels of supplementation can result in kidney stones, mouth ulcers and gastrointestinal upset (diarrhea and abdominal bloating). Hence a recommended tolerable upper intake level for vitamin C was set at 2 grams (2,000 milligrams) daily, in order to prevent some adults from experiencing these disturbances. Individuals predisposed to oxalate kidney stone formation are advised to avoid high-dose vitamin C supplementation (?1 gram/day). Large doses may also cause nausea, diarrhoea and stomach cramps.