Vitamin B12 is essential for good health, primarily due to its role in producing red blood cells, and as, together with vitamin B9, it assists the synthesis and preservation of the DNA and RNA.

Vitamin B12 is water soluble

Vitamin B12, or cobalamin, has the most complex chemical structure of all the vitamins, as seen in this figure.

In the centre of this pretty structure lies the mineral cobalt. Cobalamin is a collective term for a group of cobalt containing compounds.

Sources of vitamin B12:

Vitamin B12 is synthesised solely by microorganisms. Major sources of naturally occurring B12 are animal products such as liver, brain, kidneys, eggs, poultry, fish, mussels, beef, yogurt and cheese, where it is attached to a protein. 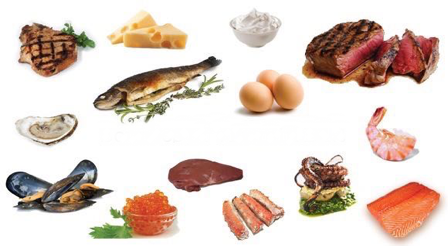 Vitamin B12 also has a separate biochemical role unrelated to folate. It is essential in maintaining the sheath that surrounds nerve cells, preserving and maintaining the integrity of the neurones and the synthesis of neurotransmitters, thereby keeping the nervous system healthy. Also it plays an essential role in folate (B9) metabolism. In teaming up with vitamins B6 and B9 it controls the levels of homocysteine in the blood, thus avoiding an increased risk of cardiovascular problems such as arteriosclerosis (hardening of the arteries) and blood clots, which are associated with elevated levels of homocysteine.

Vitamin B12 is a tough one to absorb. When the food you eat reaches your stomach the protein-digesting enzymes and stomach acid split off the protein, freeing the vitamin B12. Once the vitamin B12 is freed, a protein called intrinsic factor (IF) is needed for its absorption, which we make in our bodies. Its role is to attach the vitamin to the wall of the intestines. Only at this point can the vitamin B12 be absorbed and transported into the blood. Once it is taken in, it binds to another special protein and then gets circulated through the blood.

When vitamin B12 is used in the body, it is returned to the liver and then gets into the bile. With the bile, it will return to the intestines where it is reabsorbed, hence it is re-circulated through the body in a continuous loop. This loop provides a daily turnover of the vitamin in the body, and coupled with a good digestion many people have managed not to be vitamin B12 deficient. Because of this continuous loop, vitamin B12 deficiency normally takes many years to show up.

Before the discovery and medicinal use of vitamin B12 in the 1930s and 1940s, deficiency could be fatal. Fortunately, as our understanding of this vitamin has increased, debilitating or deadly vitamin B12 deficiency is relatively rare today. In healthy adults, having a well-balanced diet, vitamin B12 deficiency is uncommon, as they will get the recommended 2.4 micrograms per day from their regular diet, in addition to the amount stored in the body.

At the same time, it is also possible that people on a diet containing animal products may not get sufficient vitamin B12, because vitamin B12 from food is tough to absorb and requires the normal function of the stomach, pancreas and small intestine. In fact, most vitamin B12 deficiency issues stem from low levels or the absence of the intrinsic factor protein, without which absorption will not happen. This may occur when the immune system mistakenly attacks the protein producing cells, or as a result of genetic or inherited defects.

Limited production or absence of intrinsic factor causes vitamin B12 deficiency, which manifests itself in the form of anaemia known as pernicious anaemia (PA). Pernicious anaemia is the most common form of disease caused by vitamin B12 deficiency, and was fatal before treatment became available. This is particularly true in the elderly population, as the normal function of the digestive system is commonly impaired in individuals over 60 years of age. They may therefore experience an inability to absorb the food-protein-B12 complex in the stomach. Low levels or the absence of stomach acid may contribute to the deficiency, as that is also required to absorb vitamin B12 from food. Up to 30% of the population of over 60s may have atrophic gastritis (low levels of stomach acid), increased growth of intestinal bacteria and thus limited absorption of vitamin B12 from food.

The reduction of stomach acid can be experienced through the chronic use of certain medications, such as for heartburn. The risk of deficiency can also be increased through drugs, e.g. metformin, and certain conditions that interfere with B12 absorption, such as Crohn’s disease, celiac disease, pancreatic disease and diabetes. Other causes of B12 deficiency include surgical resection of the stomach or portions of small intestine.

Signs of vitamin B12 deficiency

Deficiency mainly results in anaemia, due to not having enough functioning blood cells, and many different types of damage to the nervous system.

Symptoms due to low levels of vitamin B12, attributed to malabsorption, include loss of appetite, weight loss, pale skin, fatigue, headache, tinnitus, shortness of breath and nervousness. Common neurological symptoms include confusion, depression, memory loss, dizziness, numbness and tingling in the fingers and toes, or soreness in the mouth and tongue.

Haematological changes mainly manifest in the progression of severe vitamin B12 deficiency anaemia from the impaired production of blood cells, as vitamin B12 is essential to the formation of new red blood cells.

Vitamin B12 deficiency can be confirmed through blood tests, including a blood count to identify the vitamin B12 level, specifically in cases of pernicious anaemia.

Vitamin B12 cooperates with folate in the rapid synthesis of DNA during cell division which is essential in the normal cell formation. A deficiency of either compound lead to impared DNA replication in the bone marrow resulting in the production of red blood cells that are larger and deformed (megablasts) and less numerous than normal, causing megaloblastic anemia and other hematological abnormalities.

Vitamin B12 also has a separate biochemical role, unrelated to folate, causing damage to the nervous system and leading to neurologic disorders in deficient subjects. Supplementation with folic acid will provide enough folate to restore normal red blood cell formation.

However, if vitamin B12 deficiency is the cause, it will persist despite the resolution of the anemia. Thus, megaloblastic anemia should not be treated with folic acid until the underlying cause has been determined. If large doses of folic acid are given to an individual with an undiagnosed B12 deficiency, anemia associated with the vitamin B12 deficiency may be reversed but neurological complications due to the deficiency can not be corrected, leaving the individual at risk of developing irreversible neurological damage.

Vitamin B12 treatment and supplements:

To treat B12 deficiency, it is helpful to examine your diet, medication or alcohol intake. If sources of B12 are not a part of your regular diet, or if your body has difficulty absorbing sufficient levels, supplementation will help, for example with fortified breakfast cereals enriched with vitamin B12. Vitamin B12 in supplements is easy to absorb, as it is not bound to a protein and does not require stomach acid.

Deficiency can also be corrected with vitamin B12 injections to bypass intestinal absorption, or a high dose of 1 mg per day as an oral supplement. Oral vitamin B12 formulations can be in the form of sublingual tablets, sprays or liquids. The principal form of synthetic vitamin B12 used in oral supplements is known as Cyanocobalamin, which readily metabolises into the forms of B12 used in the human body.

The link between vitamin B12 and B9:

Food contains a mixture of nutrients that work together in each mouthful, therefore should be eaten together.

When discussing B12, we cannot avoid talking about B9, or folate. Like vitamin D and calcium, these two B vitamins form one of the best nutrient couples. They are linked in a number of processes within our bodies, such as the essential role vitamin B12 plays in folate metabolism, and helping the body absorb folate. Vitamin B12 co-operates with folate in the synthesis of DNA.

In order to carry out its cellular tasks, folate is turned into useful forms in a complicated cycle. While in this cycle, vitamin B12 is required for folate to get into the cells. Indeed, you can have all the folate in the world but it gets stuck in the “folate trap” and cannot move forward to accomplish its tasks unless vitamin B12 is present. Therefore, these two vitamins work together to support cell division and replication, which allow the body to replace cells that die.

This process is particularly important during time of growth in childhood, but also throughout the body of adults. For example, cells that line the stomach and cells of the hair follicle divide and replicate often.

The link between the two vitamins also becomes clear when discussing deficiency. When there is a B12 deficiency, folate is trapped in a form that is not usable by the body, which results in symptoms of folate deficiency, even in the presence of adequate folate levels. Hence, in both folate and vitamin B12 deficiencies, folate remains unavailable to participate in synthesis and preservation of DNA integrity.

The availability of folate and vitamin B12 at the same time also affects the rapidly dividing cells in the bone marrow. Deficiency will lead to the impairment of DNA sythesis, resulting in the production of haemoglobin-poor, not fully functioning, red blood cells, which leads to megaloblastic anaemia.

Low levels of vitamin B12, as well as B9, during pregnancy has also been associated with an increased risk of neural tube defects (NTDs), which is described further in our discussion of vitamin B9.

Pernicious anaemia was a fatal illness before the 1920s. This changed after Whipple suggested eating raw liver as a treatment.

Read about vitamin B6

Read about vitamin B9