Lurking at the back of the shelf in its ragged and foxed dust jacket, Delightful Food by Marjorie Salter and Adrianne Allen Whitney, published by Sidgwick and Jackson in 1957 and costing 25s, is another period gem.  English titles stand out amongst the French;  Dry Curry Cavalry Club, Coldstream Eggs and Sauce Tintagel, for example, and some wonderfully evocative footnotes - more of those later.

To kick off, here is the foreword by Noël Coward in which he reveals that he took up cooking in 1956. And what fun he had with his new hobby - the evening the Oven Blew Up and more. Oliver Messel did some extraordinary illustrations in modern day Arcimboldo mode, one of which is posted under the Coward extract. 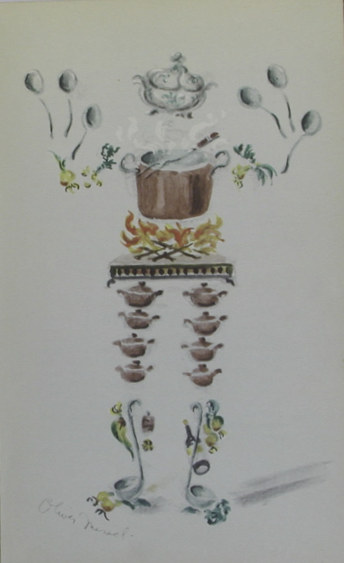 Among the trends of the present day - the trend towards Rock 'n' Roll, the trend towards self-immolation (known as the Death-Wish among friends), the tendency to drop the H-bomb on the neighbours etc., far and away the nicest is the trend towards the kitchen. Nowadays everyone, or very nearly everyone, cooks or has a specialité which they can whip up in a trice, everyone admits the Importance of Chives, everyone assumes a knowing look after the first bite or sup - "A pinch of cinnamon would have made all the difference," they say - everyone has at least one recipe handed down from Great Aunt Laura or given to him by the chef of the remotest auberge in the Haute-Pyrenees; in fact, never has cooking been such fun. I have never had such fun myself. I have absorbing and heated arguments with bejewelled ladies at Ambassadorial receptions as to the best, the only, way to make a Yorkshire pudding; exchange deeply cherished recipes with people under oaths of secrecy much as lovers used to exchange their most sacred vows, and I unmercifully browbeat my host or hostess into giving away that ultimate ingredient that makes All the Difference. Which is a far cry from the days when the Shepherd's Pie and the Shape were handed round and consumed in silence.

Of course this trend isn't new, nothing is under the sun, and over three hundred years ago Robert Burton said, "Cookery is become an art, a noble science; cooks are gentlemen," but I am sorry to say that it wasn't until lately that I heard the call to come into the kitchen. The year 1956, which is shuddering to its close as I write has been an eventful one for me and not the least eventful part has been devoted to my culinary adventures. There was the wonderful day when my first soufflé rose to such heights that it nearly hit the top of the oven (the oven fortunately had a glass door so that I was able to watch this phenomenon open-mouthed), the thirty-six hours I spent first trying to make puff-pastry, during which I had to cancel all engagements and lost a night's sleep into the bargain, the evening the Oven Blew Up, the afternoon the lid flew off the Waring Mixer and sprayed unreachable parts of the ceiling with chocolate mousse, and the day I said "Leave the canapés to me" and later found that several of the guests had taken one nibble and then dropped them, not I must admit without reason, behind the sofa. I am learning the hard way but I am proud to say that at the end of my first year I have more than once turned out a creditable three course dinner for six.  Up until this year I had always appreciated good cooking but never tried to cook and the only pronouncement I had hitherto made on the subject was "If it's rissoles I shan't dress", a rule I made in 1929 and to which I strictly adhere.

From Delightful food by Marjorie Salter & Adrianne Allen Whitney, with a foreword by Noël Coward and decorations by Oliver Messel, published by Sidgwick and Jackson, London 1957

From the Back of the Shelf